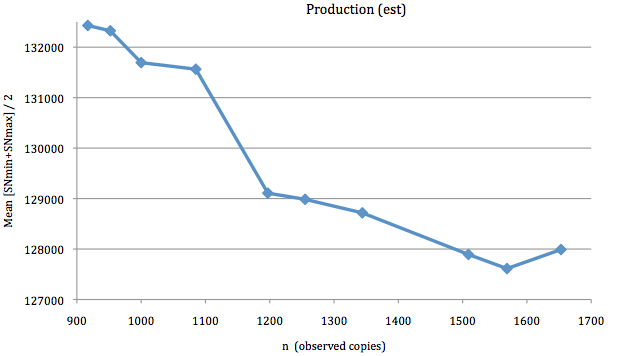 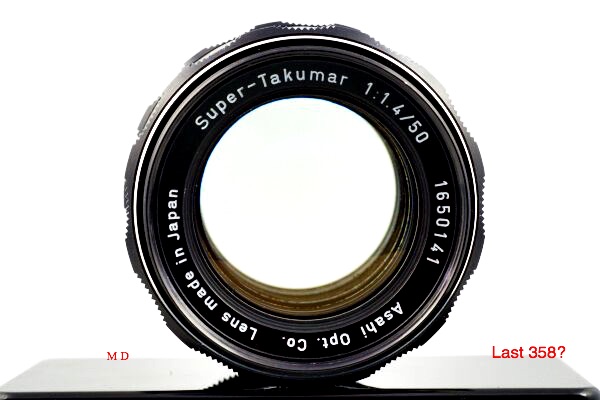 The first model of the fastest standard Super-Takumar. It has 8 elements in 7 groups. The back of the aperture control switch is blank and has no inscribed product number. Because it is distinctive and was sold for two years with the earliest Spotmatic cameras it has gained a reputation for a variety of reasons. Much discussion about this lens centres on how to identify it. It's a popular lens for digital photography and movie-making and, like its improved later versions, those who can justify it will pay a fairly high price for it second hand.

It is not a rare lens but the number of copies in good condition is diminishing. Almost 128,000 copies were made in 88 batches. It has two dominant cosmetic styles and copies in the first three batches vary in minor ways (see below) due to legacy issues. Serial number ranges overlap significantly with the next version of this lens in an irregular way, so it pays to be able to identify them. Aperture switches on this model do not have model numbers inscribed in them but all copies of the next model (37800) do. Near the end of production some batches are assembled with parts that are not standard and keen eyes can spot these (see Notes)

​The rear glass of this lens protrudes into cameras further than any other lens because of the extra 8th element. Push-plates for actuating lenses inside cameras were changed from rectangular to curved to provide more space just before the earliest Spotmatic onwards (Photokina 1961?). (Some earlier cameras models were converted as shown by their red "R" rewind buttons ). (Most importantly, no other lenses are affected by this warning.)

​An external sign of this compatibility is the red "R" on the rewind button (formerly green). Using this lens model (358) on older cameras with a rectangular push-plate (and a green "R") will damage the rear element.
DESCRIPTION
VARIATION
NOTES
LENS PRODUCTION  (∑ lenses)  ∑n = 1653 Serial Numbers observed in 88 Batches covering 115,896 SN min. < ∑ lenses < 140,084 SN max.
SN min. = accumulated total of serial numbers observed within 88 batches
SN max. = accumulated total of serial numbers observed between adjacent batches of other lenses.
Two main Styles:  ▼ Round lettering; SN before name; comma after maker's name. ▲ / ▼ ▼ Oval lettering; SN follows name; no comma after maker's name. ▲▲
Underlined batches have copies of both styles. Otherwise:F(10/12), A(9/11) are consistent after batch 4.
Batches 1-4 contain copies with legacy styling and extra half stops may be available.
# Occasionally final copies use the depth of field gauge plan from the next model (37800) as the former parts are unavailable.
MARKETING
The Asahi Pentax Spotmatic Operating Manual (61015) and Honeywell Pentax Spotmatic Operating Manual (61014) has Important notes on page 20-21, or 18-19, respectively. Different editions give different warnings. Note 7 from August 1966 to August, September and November 1967 and 1968 is;

"Do not use the new Super-Takumar 50mm F/1.4 lens with any other camera or any other Asahi Pentax model except with models SV   and S1a, having orange-coloured "R" marking on the film rewind knob, or you will damage the rear element of the lens."

"Do not use the new Super-Takumar 50mm f/1.8 lens with any other camera or any other Honeywell Pentax model except with models H3v and H1a, having orange-colored "R" marking on the film rewind knob, or you will damage the rear element of the lens."

"The Super-Takumar 50mm f/1.4 lens is made for use with the Spotmatic. It can be used with only two other cameras: the Asahi Pentax SV and S1a with an orange-coloured "R" marking on the film rewind knob. Use with any other camera will damage the rear element of the lens."

"Primarily made for use with the Spotmatic II, the 50mm f/1.4 Super-Multi-Coated Takumar can also be used with the original Spotmatic, Spotmatic IIa, and models SL and SP500. Further, they can be used with two other cameras: Honeywell Pentax H3v and H1a with an orange-coloured R marking on the film rewind knob. Use with any other camera may damage the rear lens element."

All the above were printed in Japan.

The Honeywell Pentax Cameras, Lenses, and Accessories (P1009) of October 1970 printed in USA omitts this issue.

So, logically, this lens (358) is too long for camera models with a green-coloured rewind knob. (Mind! It's probably too late to discover this when removing film!)

The second and subsequent statements (1969,1973) are globally incorrect because they implicate (unnecessarily) all subsequent new 7 element models of the 50mm f/1.4. Attempts to simplify marketing ignore the differences between subsequent lens models far as the customer is concerned. So the literature is opaque about this issue and remains a topic of discussion even now (See below).

(An earlier compatibility warning exists about using some Auto-Takumar 55mm f/1.8 lenses with SN below 462500 (345 types 1, 2, and 3) on SV and S1a cameras. See lens page.  It points to simple logic, that automatic functions on new automatic lenses will not operate on previous camera models.) Clear message!
LITERATURE

Early compatibility warnings for this lens (See INTRODUCTION) in general literature are poorly handled  They reinforce the message that only makers instructions should be consulted. All kinds of customers need to understand an issue, not only a target market!

The first edition of Asahi Pentax Way (1966) gives the wrong message. The error is corrected in The Honeywell Pentax Way (1968). Another attempt in the Asahi Pentax Way (1967) (second edition) misses the point; seeming to imply that subsequent 7 element lenses are not backward compatible. (Following the lead of the generalised makers instructions in 1969.) This continues in Asahi Pentax Way up to the eleventh edition in (1979) until it is omitted.

​The Asahi Pentax Guide Emanuel W. D. issues a warning without adequate explanation and declares the 8 element (358) to be the lens for the Spotmatic from the 1965 edition until 1979. Some editions temporarily list 7 element lenses, including the final SMC version, and continue the warning about the original 8 element lens (358) ignoring any ideas about succession.

Close editing fails to give any back story (so customers are mislead by poor, limited communication); treating customers as if they have 2 second attention spans. Posterity has to figure it out alone in the end.  If this page is too simplistic or misleads I welcome correction. Oh, for communicators who communicate.

Later enlightened authors (e.g. Gerjan van Oosten (1999)) realised (358) suits only cameras it was design to fit and is too long for others.
Powered by