JAPAN (not for export)

A standard Takumar lens created for early experimental purposes in very small numbers. Photographs of 2 nameplates (bezels) with low serial numbers (SN 100010 and 100011) made for this lens, and two lenses with pre-production characteristics provide evidence. It was made but not commercially produced, even domestically and complete surviving copies are not known.

A photograph in a 1958 photographic magazine (below) accompanying an article written to announce the launching of the new Asahi Pentax (AP) camera in North America illustrates (possibly two) prototypes or pre-production copies.

​In 2016 a Takumar 58mm/2 for sale in Japan with a bezel from this lens supports the contention that only prototypes exist. The bezel is mounted on the body of a 1957 production model of the Takumar 58mm/2.

Modern Photography (January 1958) published a review article No Image Blackout by Myron A. Matzkin which illustrates a copy (SN 100010). The lens is attached to an Asahi Pentax (AP) camera. Its distance scale is graduated in Feet which suggests it was an early contender for export. However, Myron's text tells us that the camera would not be exported with that lens. The Takumar 55mm /2.2 six (sic) element lens instead would be sold with the AP for a total of US$195. Confusion surrounds this report as that lens contains 5 elements. Perhaps he also learned of the new Takumar 58mm /2 (which has 6 elements) that could be supplied with the camera and may well be the successor of the prototype Takumar 58mm/1.8.

Part of Myron's text (addressing a US audience) is quoted below.
'Lenses are interchangeable with these cameras. However the Asahi Pentax will be supplied with a Takumar 55/ 2.2 lens. We had no opportunity to test this lens.' (ie. the Takumar 55mm/2.2 lens). 'The lens supplied with the camera for testing purposes will not be imported into this country.'

Thus we are led to believe Myron saw and tested the camera with this prototype lens attached.
DESCRIPTION

Some question the existence of this lens. It's appearance will be similar to the Takumar 58/2. The optical formula is unknown.

The existence of a copy with feet on the distance scale in the article suggests it was an early contender for export to the North American market. There is no proof of commercial production for this lens. A copy shown in the only known illustration is a prototype in which 1.8 is inscribed on each side of the central marker of the depth of field gauge; a "lollipop" shape. Both characters were modified before Takumars were produced commercially.
​
An original top view of the body of this lens with a distance scale in feet is illustrated in the upper left hand side of this photograph.
​Modern Photography 22(1) (January 1958, page 65.) 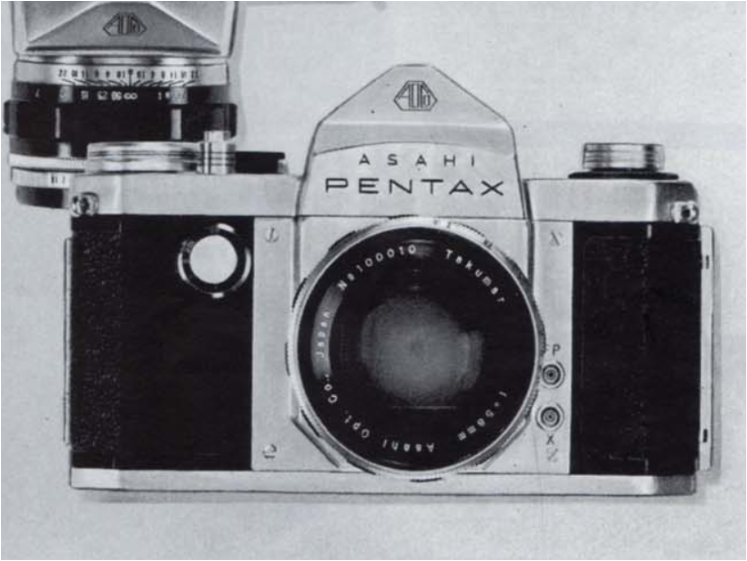