This lens illustrates the front cover of the Asahi Pentax Instruction Guide.

The fast member of the 3 standard lenses chosen for the original Asahi Pentax camera. It is constructed of 6 elements in 4 groups to Sonnar optical  design.  It was the second standard Takumar to go into production for export from May 1957 to May 1958. All black and chrome and black regular coloured lenses (for matching AP cameras) were made in 10 batches of approximately 500 to 3,750 copies.  It was discontinued in early 1958 when standard lenses of Gaussian design and 55mm focal lengths were adopted by AOCo. Nevertheless it out-sold it's slower rivals, even the new Gaussian designed 55mm f=2.2, which continued to be produced for two years.

The original Asahi Pentax camera was provided with three standard lenses, each with a different combination of speed, focal length and optical design.  Two, including this lens, were new and the third was based on a lens made previously (since 1954) for Asahiflex cameras. It was an innovative time at AOCo.
​
An Infra-Red focus correction mark was trialled on the depth of field scales of this lens but did not appear on other Takumars until the 1960's; although the first batch of the new Takumar 3.5/ 135 was also included in this trial.
DESCRIPTION

A new pre-set lens designed with 6 elements in 4 groups (Sonnar). Externally, lenses are black and chrome, or all black. The threaded filter ring is 46mm in diameter and the diaphragm has ten triangular blades. The barrel is made of black nickel alloy. The Asahi Pentax (AP) Instruction Guide states the viewing angle is 41° and weight is 160 grams. Emanuel (1960) records the weight as 5.5 ozs (156 grams) and a copy I have weighs 184 grams.

Collaring the barrel is a focusing ring with a distance scale on the trailing edge.  Turning this ring anti-clockwise moves a helical mechanism to focus the lens closer. The focus ring and threaded nameplate are black with fine white lettering.

Scalloped into and equally-spaced around the circumference of focusing rings are 12 finger grips. Each grip has 10 parallel grooves cut sharp into the metal. Regular spaces remaining between finger grips form rectangles.

Distance scale units are marked on the left, either in “Meter”, or both "Feet" and "Meter" (from late batch 8 (SN 150800) for export and domestic markets); spelling chosen to suit initial marketing in USA. Distances begin with the infinity symbol and attenuate to the RHS with the following series of numbers. Individual copies can focus significantly closer. Corresponding distance scales on 58mm Takumars are identical.
Feet ∞ 50 25 15 10 7 5 4 3.5 3 2.5 2
Meter ∞ 15 8 4 3 2.5 2 1.7 1.5 1.3 1.2 1.1 1.0 0.9 0.8 0.7 0.6
Three chrome rings complete the lens’ external appearance. Two adjacent rings near the front move independently and have uniform fine-knurled edges. Together they operate the preset diaphragm mechanism to set the aperture. On the barrel just forward of the first ring is a red dot used for selecting the aperture.  Eight aperture stops in black numerals adorn these rings. No available half-stops or markings (such as dots) lie between these stops.  As with all lenses of this age the minimum available​ aperture stop available is f=22.
22 16 11 8 5.6 4 2.8 2
The third and largest chrome ring is fixed. Its rear end is the M42 screw thread camera mount. On the perimeter is a bi-lateral depth of field (DOF) gauge with six numbered f stops on either side of a centre to engage the distance scales on the focusing ring above. Final production copies of this lens have a forward-pointing red triangle marking the central point of the gauge just above a single numeral 2 representing the largest aperture setting. Flanking this triangle are two black vertical lines to indicate the depth of field as read from the distance scale.  The remaining set of black lines indicate 5 lesser aperture settings either side. These lines are bent to diverge away from the central point.
Production DOF gauge style
▲
22 16 11 8 4 2 4 8 11 16 22

[During production this lens was used to trial an Infra-Red focus point on the DOF gauge as described below. See VARIATIONS.]
VARIATIONNOTES
The initial design of DOF gauges for this lens and the Takumar 1:2.4 58mm were modified leading up to commercial production. The Asahi Pentax (AP) Instruction Guide (EN) illustrates two or more forms of this lens that differ in detail. The front cover displays a production copy (SN 132183) from the first batch of approximately 700 lenses produced commercially. Inside the cover and throughout the booklet earlier prototypes (SN 100021) of this lens​ (and the Takumar 1:2.4 58mm) are illustrated. Prototypes of both share details inherited from the Asahiflex era which are absent on production copies. The likelihood of such prototypes surviving until now is very low.  The characteristic details of pre-production copies are :
LENS PRODUCTION  (∑ lenses)  ∑n = 320 Serial Numbers (SN) observed in 11 batches covering 10,805 SN min.< ∑ lenses < 12,778 SN max.
SN min. = accumulated total of serial numbers observed within 11 batches and early prototypes
SN max. = accumulated total of serial numbers observed between adjacent batches of other lenses.
▼ SN prefix "No" ▲; ▼ ▼ SN before name  ▲▲;▼▼▼ SN after name ▲▲▲.
MARKETING

A pre-production copy with early "Asahiflex" styling in the Asahi Pentax (AP) Instruction Guide description (below). In production copies the depth of field scale is simpler. 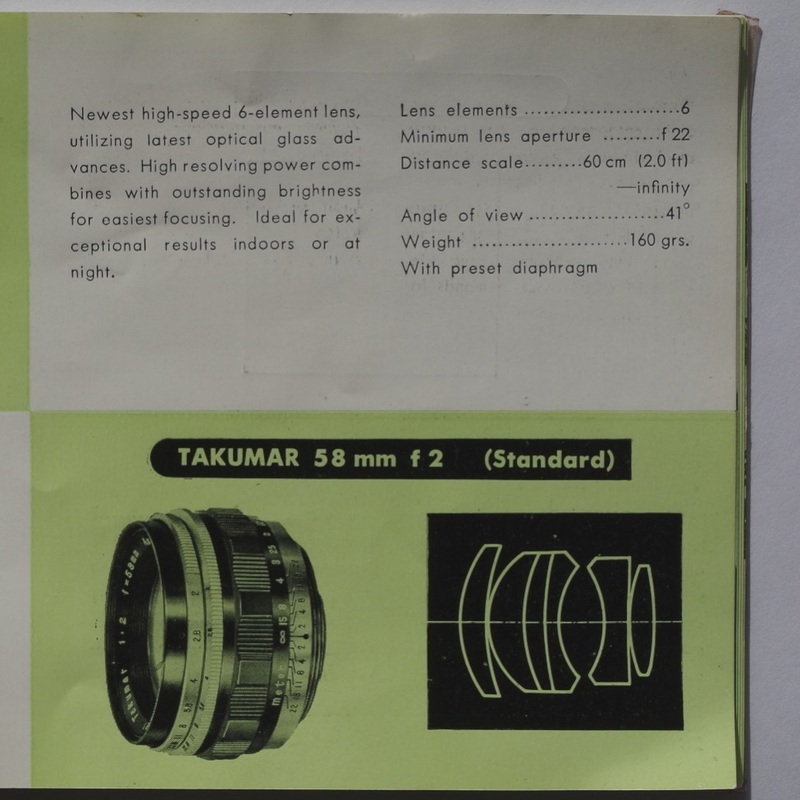