This lens and the Takumar 1: 3.5 / 135 (Model 2) that replaces it have the same optical design (5 elements in 4 groups) and are contemporary with Asahi Pentax S2, and SV cameras. They filled the gap in the market between the very popular first 135mm Takumar and Super-Takumar models which were sold in large numbers.

Two kinds of construction exist; copies in batches 1 to 3 weigh less than those in later batches (approx. 309 versus 317g, respectively). All have 8-bladed apertures. Because the production period is short copies from different batches appear similar, cosmetically.  None have a SN prefix, nor a infra-red focus mark (see Notes) and all have the same 11 available aperture settings. Nameplates are identical in style but two colour variants of distance scales exist. Distance scale lettering on early lenses is all white. Later copies use blue lettering for feet and yellow lettering for the metric scale.
DESCRIPTION


To be completed.
This lens weighs less but has similar dimensions to those of its Takumar and Super-Takumar successors.

The finger grip formula of the focussing ring is distinctive with 11 grooves between 8 finger grips; or F (11/8) in all copies.

Early copies are sold with a brown leather case with a blue interior. Later copies are sold in a black leather case with green lining as illustrated. Lenses are supplied with cases and caps. A black metal lens hood is available as an accessory and is attached to the lens by threading onto the 49mm filter.
VARIATIONS
NOTES
LENS PRODUCTION  (∑ lenses)  ∑n = 106 serial numbers observed in 9 Batches covering 5,647 SN min. < ∑ lenses < 7,657 SN max.
SN min. = accumulated total of serial numbers observed within 9 batches
SN max. = accumulated total of serial numbers observed between adjacent batches of other lenses.
Styles: F(11/8);▼ White distance scales, 309g. ▲/▼ ▼ Coloured distance scales, 3 visible screws in barrel, 317g.▲▲
MARKETING
Marketing of this final, and soon to be out-dated, semi-automatic lens is brief and tentative. It is out-sold by other 135 mm Takumars, preset and automatic, despite sharing the same optical design. Historically, it remains the Auto-Takumar with the longest focal length.

In 1962 Asahi Pentax SV Sales Brochures illustrate both this lens and its predecessor.  But later SV & S1a manuals list only the latter for sale. The semi-automatic is illustrated (incidentally) in Asahi Pentax SV & S1a Operating Manuals but the Takumar 1: 3.5 / 135 (Model 1) it's very popular and smaller pre-set predecessor is still the only lens offered. The short production period may have syncronised poorly with brochure printing constraints. 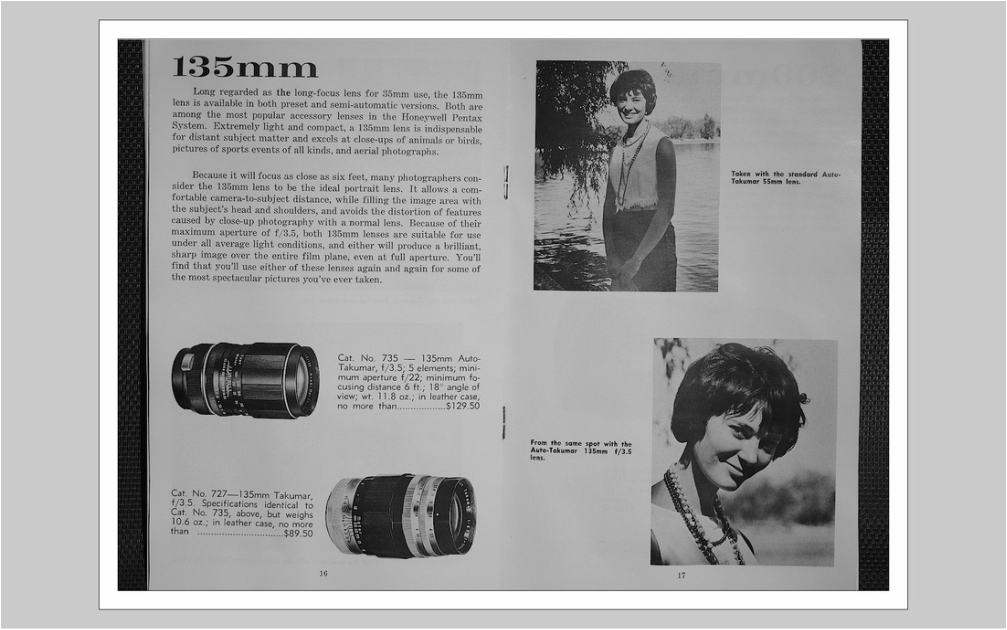 LITERATURE
Commercial brochures rarely illustrate or list this lens and then only briefly.
Asahi Pentax SV Sales Brochures illustrate and list this lens and its predecessor as available for purchase.
Asahi Pentax Operating Manual Models SV & S1a lists only its predecessor for sale but still contains an illustration of the semi-automatic version.
Heiland Division, Honeywell (1962) Lenses for the Honeywell Pentax. FormH:2002 Markets the lens and its pre-set predecessor, illustrating and describing both on page16.
Honeywell Photographic Products (1965) Lenses for the Honeywell Pentax. Cat No.748. January 1965. Lists the lens as discontinued.
GENERAL LITERATURE
After discontinuation in 1965 the lens is lost to general literature for approximately thirty years.
Emanuel W.D. Asahi Pentax Guide. Twenty-one editions of this booklet (1960-1981) don't include it.
Cooper Joseph D. (1964) Pentax Pocket Companion. Second edition. The lens is listed early but lost from the fourth edition.
Fuhring Robert (Editions 1962, 1963, 1965) "Pentax and single lens reflex photography." Contain Honeywell catalogue numbers and prices of this lens and all its accessories. The fourth and all subsequent (1967-1972) editions do not include the lens.
"Honeywell Guide to Sports Car Photography" (1964) Promotes the lens (at the discounted price) alongside both its successors.
Cecchi Danilo (1990) Asahi Pentax and Pentax SLR 35mm Cameras 1952-1989. Lists all Auto-Takumars except the 135mm version.
van Oosten Gerjan (1999) The Ultimate Asahi Pentax Screw mount Guide 1952-1977. Contains a black and white photograph of a late copy and describes its characteristics.
Powered by